Our event at CODA on April 8th, Operating Your Own Sporting Business in Taiwan, was another success. Thanks very much to our expert speakers!

First, Kathleen Batchelor talked about her journey that took her to being a successful Taipei instructor of Zumba, a globally-popular aerobic dance exercise program that incorporates Latino dance styles and hip hop. 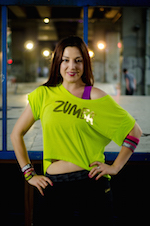 After dabbling in ballet and burlesque, she says she was hooked after her first Zumba class. After her Zumba instructor left Taiwan, she stepped in and took over the class, soon thereafter receiving her official certification as an instructor. She now has hundreds of students, and is well on her way to leaving ESL teaching completely behind.

Persistence and skill were part of it, but she claims her success is mainly based on Free Electrifying Joy! Anyone can succeed if they follow their true passion.

Thanks for the inspiration Kathleen! 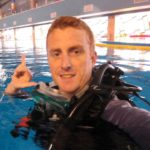 Second, we heard from Nigel Anderson, owner of the Scubar in Fulong Beach, where in addition to providing food and beer, he takes divers out to sites on the North East Coast. He starts his trainees at the Taipei Songshan Sports Center pool, a step he says is essential for safety.

A licensed PADI instructor, Nigel says that it was always his dream to be a business owner. So when he had an opportunity to buy the Fubar (a popular foreign-owned restaurant in Fulong), he jumped at the chance.

Nigel had gone diving in Canada’s Vancouver Island, Okinawa, Australia and Thailand. But when he first started diving in Taiwan, in Longdong, he was taken aback by the limited number of dive sites that led to massive overcrowding. So he and his crew went exploring and found lots of good coral – 32 new sites, to be exact.

Now business is good, and he has signed on with the big new Fullon hotel in Fulong. But problems remain: he still gets flack from fishermen who think that scuba divers scare away all the fish. And his relationship with his landlord went south when he asked for an upgraded electrical connection. However, his drive to explore has helped him bring his business dream to life. Thumbs up, mate!

Next, Shawn McClelland gave a talk. Shawn is a successful serial entrepreneur whose startup credits include Luxy, OMNI nightclub, the Green Room, and MIT English Schools. One of his big current projects is 03 Fitness Taipei, which has top-quality modern equipment and innovative fitness programs that incorporate boxing, kicking, yoga, interval training and more.

One of Shawn’s main points was that selecting business partners is of the utmost importance. Not only is it essential to share a clear vision with partners, it is also crucial to enumerate any troublesome situations that might come up and have a clear plan for them in black and white. People can have a very different sense of fairness, especially if they are “sweat equity” partners – those who contribute something other than money, such as skill or contacts, to the business. If you don’t have a clear system for dealing with possible disputes, there can be grief, so always have an exit strategy.

Shawn also said that the legal requirements for owning a gym are quite onerous, especially regarding obligations toward clients. So get a good lawyer to write up your contracts, but don’t automatically trust them to do their best for you. You yourself are responsible for making sure you get contract terms that protect your interests.

Last but not least, he mentioned that it is useful to use group cohesion to keep customers engaged. Get some class spirit going so members will nag each other into not missing classes. This is good not only for your business, but helps satisfy your clients’ fitness goals as well.

Next, Tomasz Hasinski of Runivore gave a great presentation. “Eat Superfoods and Run!” is Runivore’s moto, and the company

sells nutritious Chia seeds and Chia-based food products. Their company was created by three runners, who found that their middle-aged bodies weren’t up to the demands of 100k runs powered by burgers and fries alone! Like Shawn McClelland, Tomasz discussed the importance of finding the right partners and having a dispute resolution system. For them it is usually based on going on a run together after an argument! But they also have scheduled “airing out” meetings on a regular basis to keep things real.

He also emphasized the importance of quality: never take any shortcuts when it comes to quality. It took them a while to find the right clean and safe manufacturer for their Chia seed bars, but they did: one that also produced for Starbucks and hospitals.

The company is in the midst of expanding to Hong Kong, Singapore and Thailand. Good luck guys, and thanks for sharing!

Last but not least, we heard from Andrew Lunman, creator of CODA, Bongos, Forkers, and other successful restaurants in Taipei. This was Andrew’s farewell to the CCCT Small Business Network, as he is returning to Canada, and it was a sad one for all concerned. Andrew’s experience and community spirit has been a driving force for the Small Business Network. His last message was that it was a real pleasure to him to see so many expats with creative ideas. His final official words to the expat small business community, regarding any small business plan they might have: “Go ahead and do it! Do it!”

One thought on “Operating Your Own Sporting Business in Taiwan (Recap)”